Our capacity to analyse space and time patterns in biological, ecological and environmental phenomena was transformed in the 1980’s by Geographic Information Systems (GIS), remote sensing and computer-based environmental modelling. In parallel, developments in numeric analysis addressed the ever-growing volume of spatial data. At the forefront of these developments were the pioneering efforts of the CSIRO Division of Land Use Research (now Land and Water), with one of its well-known products being Lee Belbin’s PATN program (Belbin 1989). Within PATN was a suite of functions that provide a flexible approach to the numeric classification of landscapes and seascapes, enabling areas of vast geographic extent to be analysed at increasingly fine spatial resolutions. These capacities broke the pre-digital geographer’s adage that “analysis of large extent means using course resolution data”.

Over the last 20 years the PATN approach has been applied to a large array of research and practical problems, including assessment of World Heritage values in the Wet Tropics of Australia (Mackey et al. 1989), rainforest-environment relationships (Mackey 1993), comparison of boreal forest management ecoregions (Mackey et al. 1996), biodiversity management in New Zealand (Leathwick et al. 2003), and a range of applications in South Africa (Fairbanks 2000) and the USA (Hargroves and Hoffman 2005). One core PATN function that enabled these landscape classifications (Belbin, 1987) have now been incorporated into the Spatial Portal of the Atlas of Living Australia.

Why do we want to classify landscapes?

Classification can be applied to various kinds of biodiversity-related problems and questions. The approach is equally applicable to seascapes but the focus of this Case Study is a terrestrial application. There are three foci of landscape classifications (Mackey et al. 2008):

What are the benefits of numeric classification?

Prior to the numerical approach, landscape were classified using an ‘Integrated survey’ method whereby spatial units were classified by land surface patterns perceived by an expert through visual interpretation of air-photo images supported by reconnaissance field survey (Christian and Stewart 1968). The mapped patterns largely reflected the expert’s field of knowledge and on-ground familiarity with the region of study. The method therefore lacked a sufficient degree of objectivity and thus repeatability. A fundamental limitation of the integrated survey approach is the assumption that biogeographical entities comprise spatially nested hierarchies, which is not always the case. Furthermore, there was no explicit method for extrapolating the field survey data; correlation of sampled and un-sampled spatial units was assumed.

The numeric approach uses a bottom-up classification procedure – spatial patterns are generated based on analysis of a large number of spatial units such as grid cells or micro-catchments. The spatial units are agglomerated into classes based on a quantitative measure of their biological, environmental or ecological similarity. Classes of regions can be spatially disjunct, adjacent or nested as empirically revealed. This approach has the advantage of forcing theoretical assumptions about how the land is classified to be made explicit, making a classification repeatable.

The Case Study is based on a classification of the Australian continent focused on the second theme above; patterns in the drivers of ecosystem processes.

The Atlas classification option is accessed from the menu option, ‘Tools’ and then ‘Classify’. The study area is selected first; in this case, Australia. Then, the user selects the variables to be used in the classification. The choice of variables should be primarily guided by the purpose of the classification and the nature of the phenomenon being studied. It helps if a specific question is formulated which the classification can address. I was interested in identifying which landscapes in Australia have continentally distinctive substrates that are apparent within major climatic regimes and which may continue to exercise a dominant control on vegetation productivity and structure under a changing climate. In this study, I aimed at using a minimal set of variables: precipitation annual, temperature annual minimum mean and fertility based on lithology were selected.

When each variable is selected, a colour code appears in the right hand column; red indicates variables (environmental layers) which are highly correlated with any of the already-selected variables, green indicates low correlation and yellow as intermediate. Selecting multiple variables with high correlation will unduly weight that environmental component.

There are two main outputs from the classification. The first is a map showing the classification of the grid cells. The image below shows the map of the 51 group classification. While I specified 50 groups, the program may generate a slightly different number if the selected number is not a stable solution. 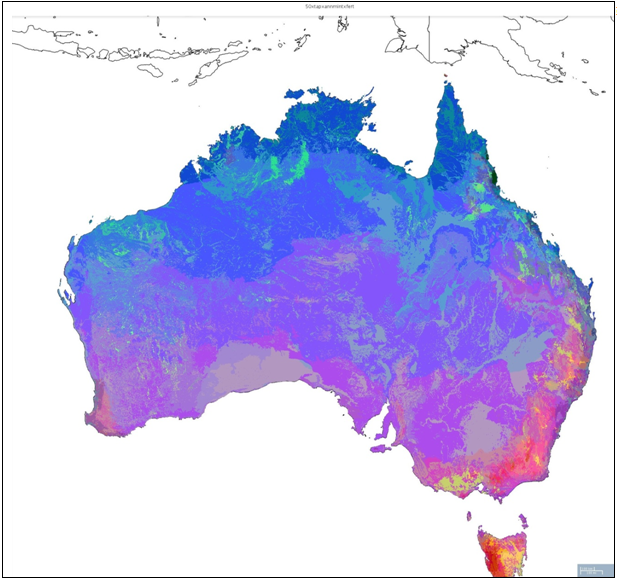 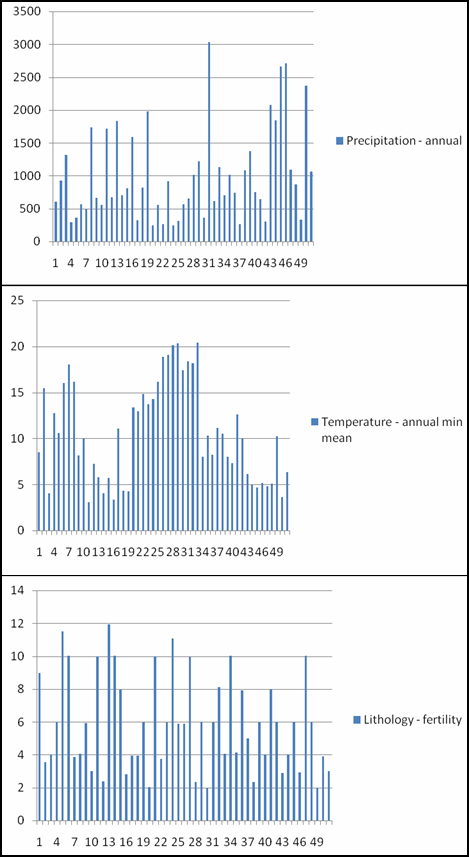 The second main output is a zip file containing a Classification means csv file (comma-separated values) file (zip file 7.4 MB, csv file 3 KB) providing the mean values of (in this case) the three environmental variables for each classification group. This file can be used for additional analyses and diagnostics in statistical packages such as PATN, R or Excel. Using Excel, the group means were plotted as histograms (see image below).

A dendrogram was generated using PATN. A dendrogram displays the hierarchical relationship of the groups based on a measure of their inter-group similarity (see image below).

A dendrogram showing the inter-group similarity of the 51 groups (environmental domains generated by the continental classification. The level of similarity delineating the 8 group level is indicated by the dotted line

The choice of the number of classification groups is subjective but the following heuristics can be applied: (i) chose a larger number by a factor of 2-3 than what you think you will need; (ii) re-run the analyses with a very large and then a very small number of groups; (iii) compare the classification with independent data relevant to the phenomenon being studied, including other regionalisations of the study area; and (iv) use the dendrogram and group means to consider the significance of groups distinguished at different levels of similarity.

Examining the top image, it appears that more of the groups have been assigned where climatic gradients are steepest (e.g. the eastern Ranges, Tasmania, South West W.A.). A smaller proportion of the 51 groups have been assigned to inland Australia, reflecting its low relief, arid conditions and broad thermal gradients. Also apparent is the contrast between the northern summer monsoonal tropics and the so-called Mediterranean (winter rain) climatic domains of southern Australia. Certain soils are also evident in the classification including the carbonate soils (calcarosols) of the Nullarbor Plan and cracking clays (vertosols) of the northern Mitchell Grasslands (see McKenzie et al. 2004). The vegetation structure of these two bioregions is strongly influenced by the role substrate plays in determining soil water availability and soil fertility. It follows that these kinds of variables must be factored into models that aim to predict climate change impacts on Australian ecosystems.

Help on the Classification

See the Spatial Portal Classification (Tools) for more information on how the classify works.

Brendan Mackey is a professor of environmental science at The Fenner School of Environment and Society, The Australian National University. He has a long standing interest in the application of GIS, remote sensing and environmental modelling to biogeography and biodiversity conservation problems. His current research is focussed on regional planning for biodiversity, connectivity conservation, and the carbon dynamics of forests ecosystems and related policy issues.

Hobbs R.J. and McIntyre S. (2005) Categorizing Australian landscapes as an aid to assessing the generality of landscape management guidelines. Global Ecology and Biogeography 14, 1–5.

Kirchman J.J. and Franklin J.D. (2007) Comparative phylogeography and genetic structure of Vanuatu birds: control region variation in a rail, a dove, and a passerine. Molecular Phylogenetics and Evolution 43, 14–23.

Leathwick J.R., Overton J.McC. and McLeod, M. (2003) An environmental domain classification for New Zealand and its use as a tool for biodiversity management. Conservation Biology 17, 1612–1623.

Mackey B., Berry S. and Brown T. (2008) Reconciling approaches to biogeographic regionalization: a systematic and generic framework examined with a case study of the Australian continent. Journal of Biogeography 35, 213–229.

Mackey B.G. (1993) A spatial analysis of the environmental relations of rainforest structure. Journal of Biogeography 20, 303-356.

Slatyer C., Rosauer D. and Lemckert F. (2007) An assessment of endemism and species richness patterns in the Australian anura. Journal of Biogeography 34, 583–596.