Tabulation is the contextual layer counterpart to Scatterplots. In scatterplots, the X and Y axes are environmental layers (e.g., temperature, rainfall) and the points on the graph are occurrences. With tabulation, contextual layers (e.g., land use, States and Territories) form the  X and Y axes as rows and columns of a table and the entries in the table cells are spatial intersections and can be any one of the following 12 values:

On the ‘Tools menu, select ‘Tabulate’.

The example is for Species richness (%) tabulated across ‘Australian States and Territories’ for ‘Land cover (class’). The 1.9% is the first row and column of the table is interpreted as 1.9% of species richness in South Australia occurs in ‘Native shrublands and heathlands’. (Click the image below to enlarge.) 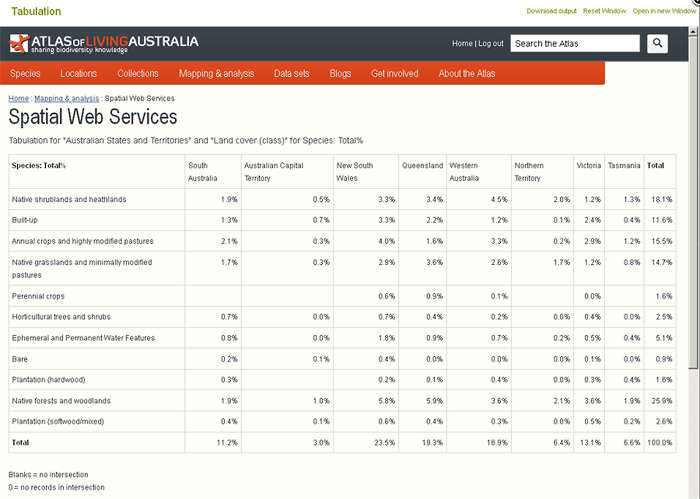 NOTE: Area tables may contain cells containing “0” (square kilmoetres). Where spatial intersections between the pair of contextual layers produces a small sliver area less than 50% of the smallest grid cell used, the value can be rounded down to zero. The occurrence and species counts will howver be correct.

A page giving all the combinations of layers and all the different value types with the three different formats – html, csv, json – using Spatial Web Services is also available »

(More detail to be added later … RL to note).