A facet is an a single attribute of a species that has been indexed against all species records in the ALA’s species database; an indexed attribute. In the Spatial Portal facet classes are rendered in the legend and on the map with different colours. In the Spatial Portal, one or more of the classes of the facet can be selected, and then filtered in or out, to create new point layers.

In the example below, the Atlas records have a facet called Institution and one of the classes in this facet would be Australian Museum. Occurrences that are part of this facet have been selected and coloured red. 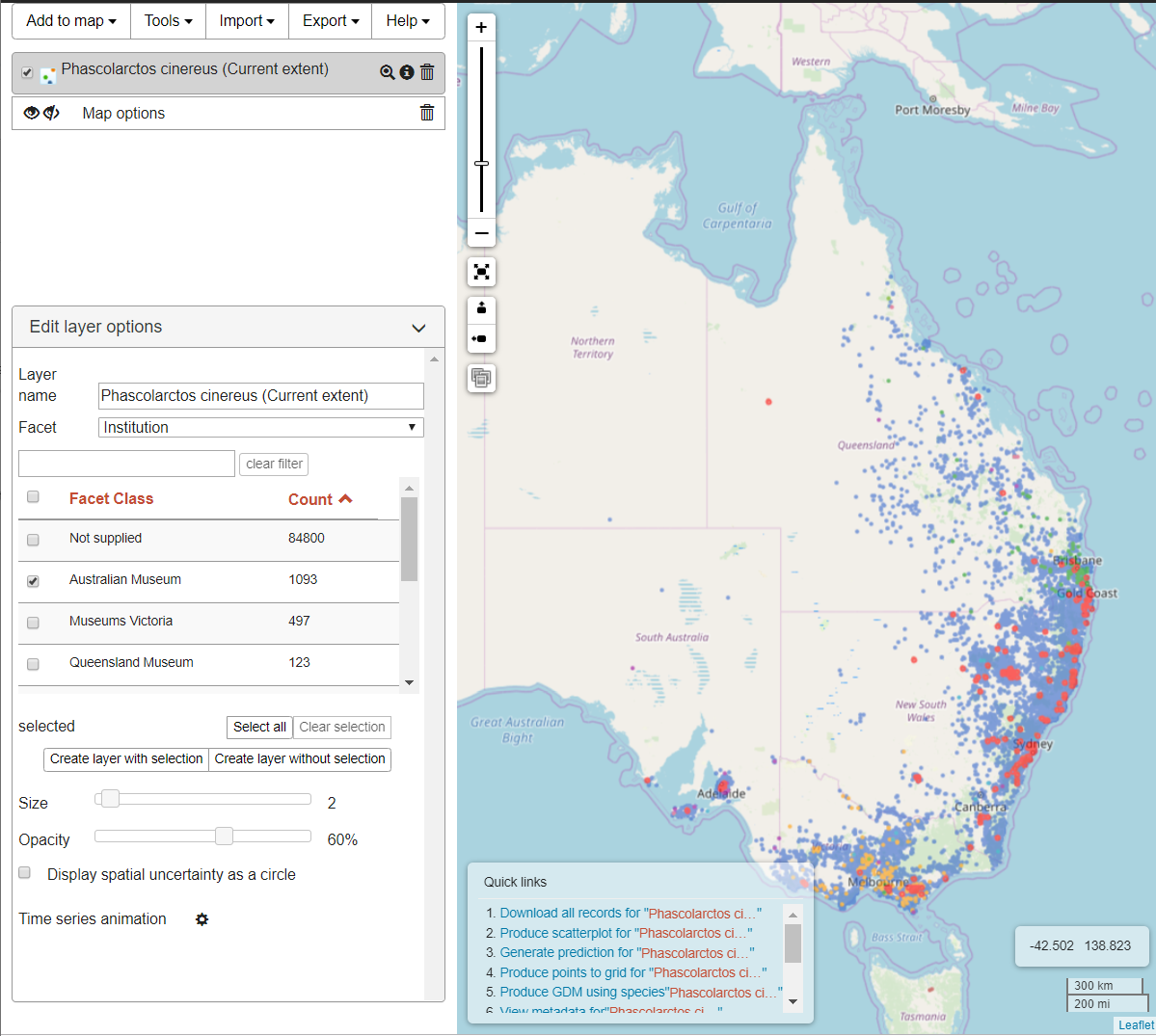 When you choose a facet in the legend, a suite of coloured classes will be displayed below the layer list and map options. Each legend class can be selected or deselected using the checkboxes to the left of the class name. If there are a large number of classes, they will be paged. The ordering of the classes will be by decreasing number of occurrence records.

The following example shows occurrence data for all species within the current extent. It is faceted on Species name showing the occurrence points coloured by class. The species Platycercus elegans is selected using the facet class checkbox and all points of occurrence data for that species are highlighted with a red circle on the map.

Step 1: Open the spatial portal. Zoom and pan the area of interest.

Step 2: Add | Species - choose All species and ensure the area is restricted to the Current extent.

Note: once the occurrence points are displayed there will be a Facet option available. The default is User defined colour. 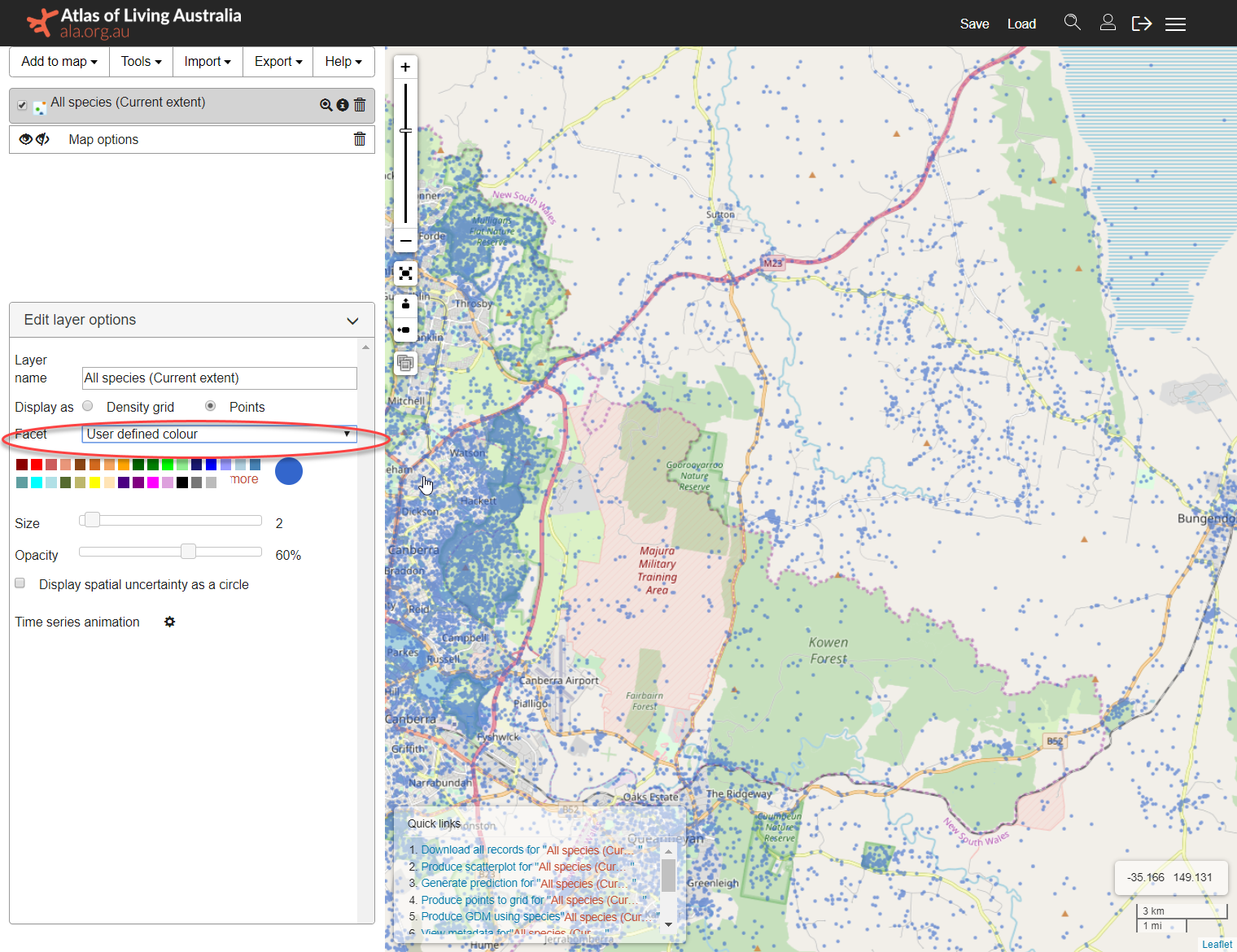 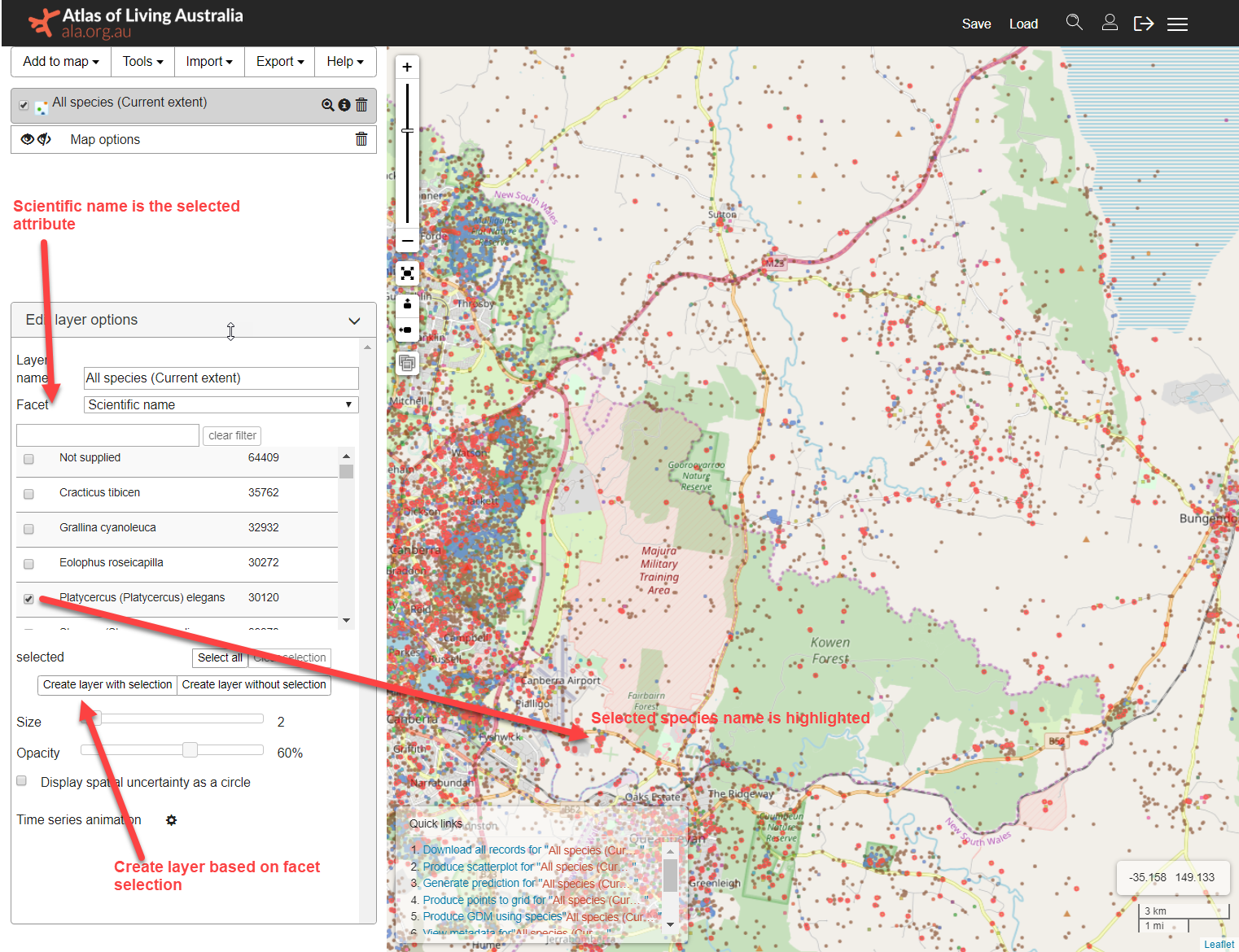 How can faceting and filtering be used? Occurrence records could be, for example, separated into specific States, by LGA areas or by Record Issues.

For example, below is an example of Eucalyptus gunnii in Tasmania with the Facet ‘Year’ selected. Once one or more classes are selected (1989 and 1990 below for example), two buttons appear below the legend

In the example below, the new layer has been renamed to make it obvious that it contains only records from the years 1989 and 1990. 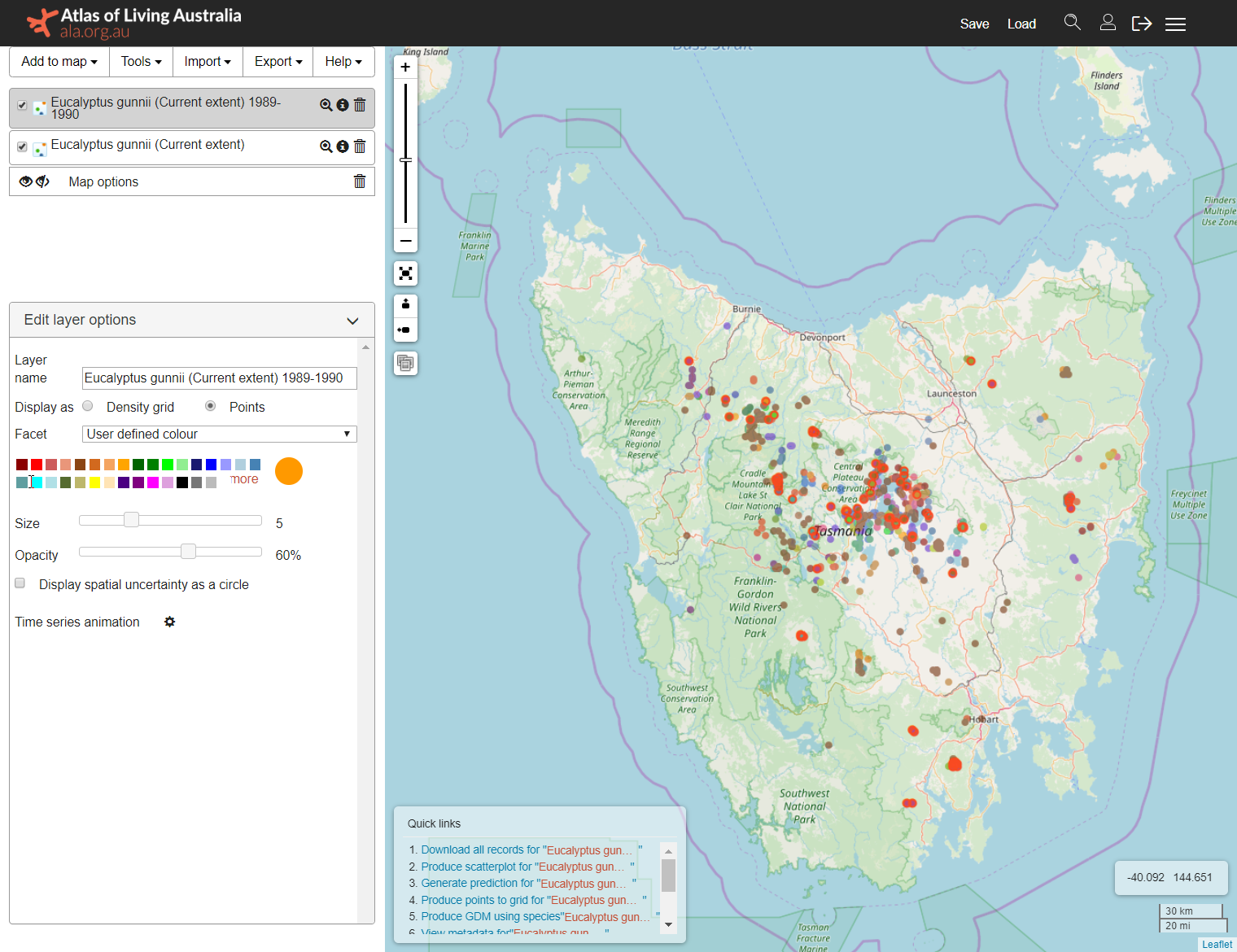 Unticking the layer of all occurrences will show you just the 1989 and 1990 recorded occurrences layer. 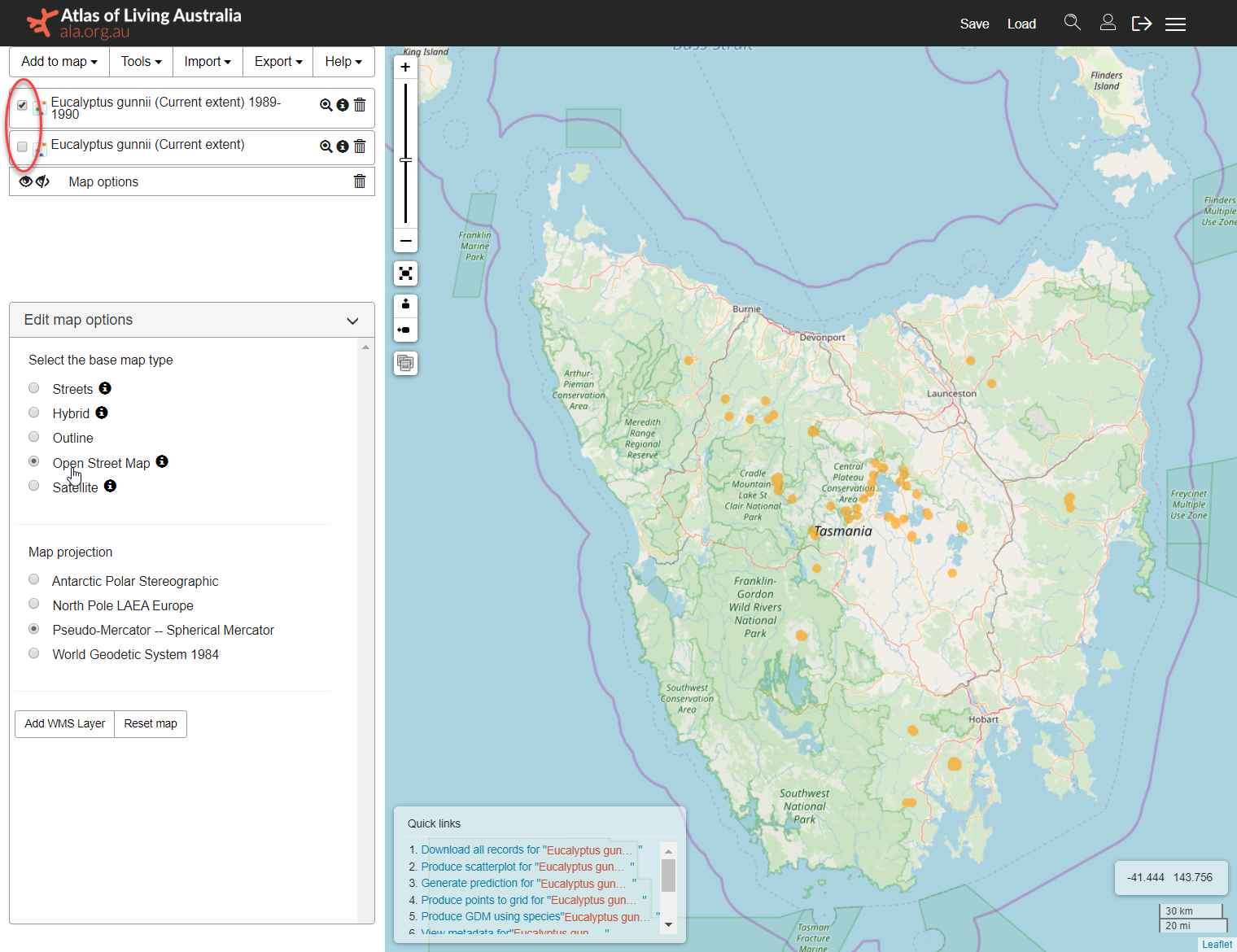 Filtering on ‘Data Quality’ issues (‘Fitness for use’)

A common task before any analyses of data is to ensure that the data is ‘fit for use’. To achieve this, we use a category of facets (see above) called ‘Assertions’. When any data is entered into the ALA, even when it is imported for use in one session (see Import | Points), a large suite of automated tests are run against each record (see http://biocache.ala.org.au/ws/assertions/codes).

Any test that results in some form of warning or error will be reported as an ‘assertion’. For example, if there is no date value in a record, the assertion will be “incompleteCellectionDate”. The description here is standardized in what is called camelCase – the text will start with lower case and where the first letter or any subsequent words are capitalized as in “thisIsAnExampleOfCamelCase”. The meaning is usually (hopefully) clear.

The classes in the Assertion category are 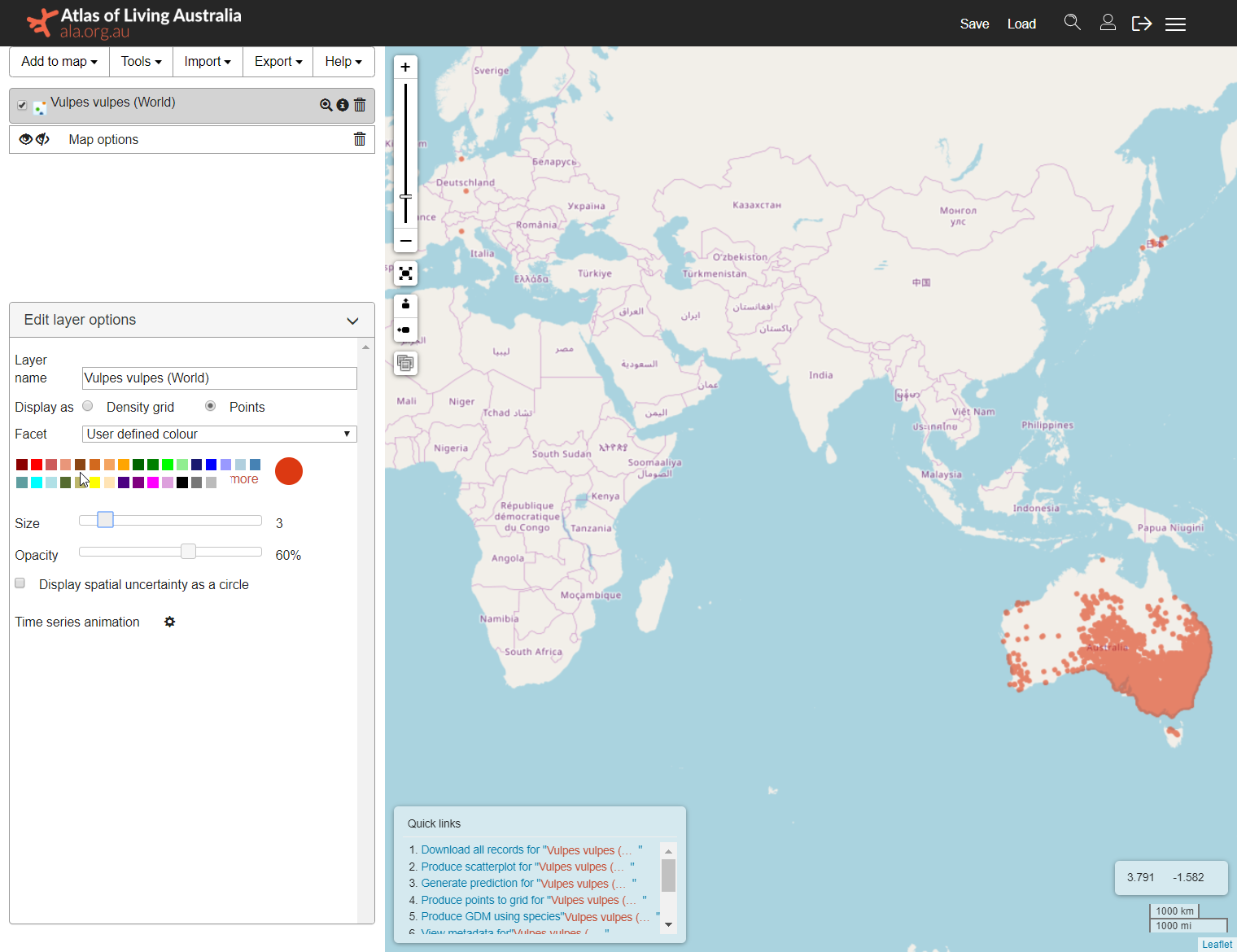 Note: that there are also 2 records that have not been coded by country. Selecting the Not Supplied value allows you to see the occurrences appear to be in Japan.

Filter out the non-Australian records. This can be done by:

Take your pick but the first is easier here. The result will be a be a new layer. This layer should be renamed to something like “Vulpes vulpes – Australia” to make it clear what this new point layer contains. 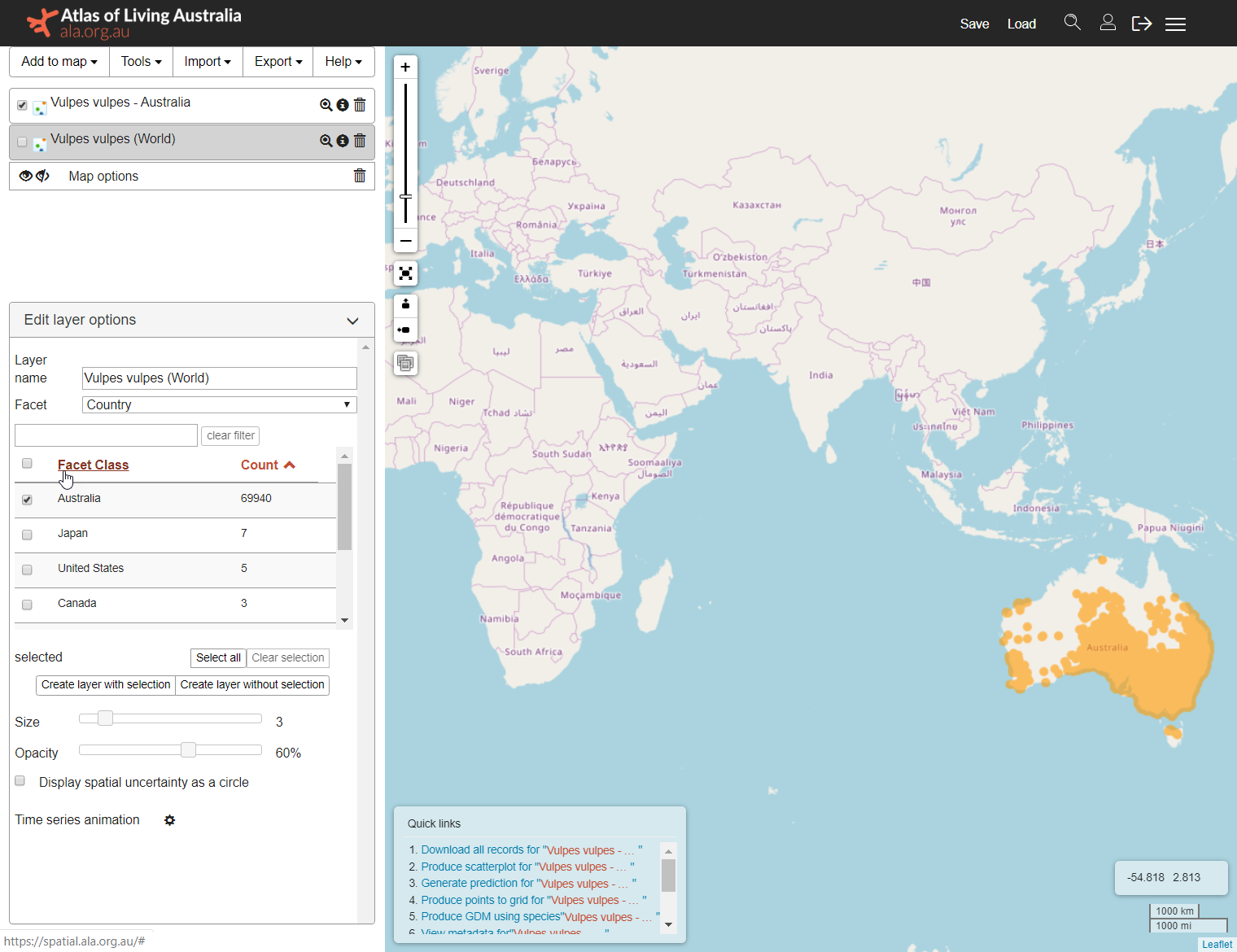 Select those issues you want to remove by checking the tick boxes beside them. What you select will depend on your knowledge of the data and the issues that have been raised by the automatic tests. I have selected a range of issues that would disqualify records from many analyses.

Once the classes have been selected, click on Create layer without selection and a new filtered points layer will be selected that do not have any of the selected issues. Name this layer something like Vulpes vulpes – Australia - Most issues removed. 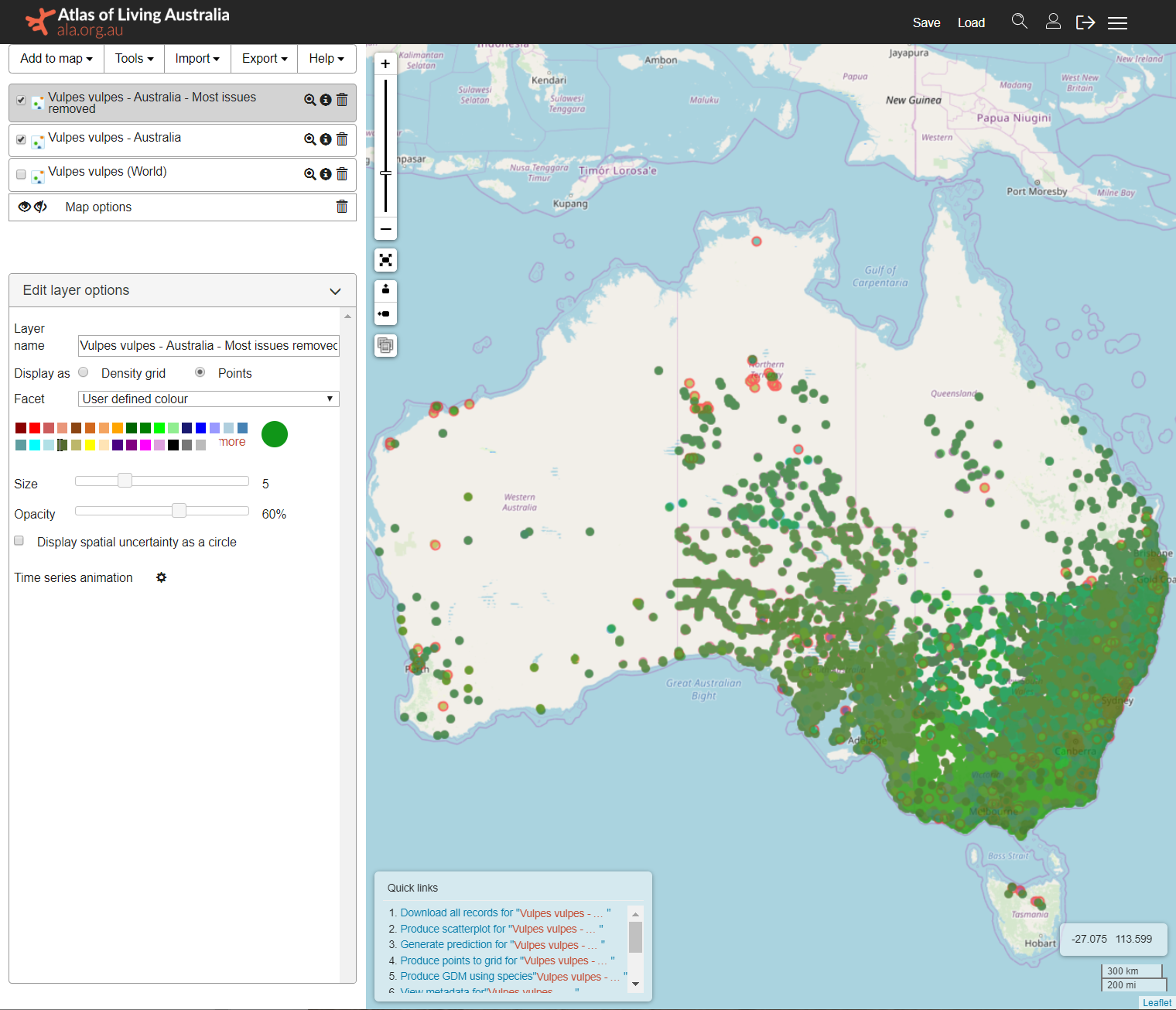 If you now deselect the previous point layer so only the last filtered layer is displayed on the map, you will see that we still have issues!

The most immediate issue is that we have foxes that appear to have been sighted swimming. In some cases, this may be genuine, but it is obvious that some have been badly geolocated or there has been some transcription problem with the latitudes and longitudes. The quickest way to deal with this problem is to select States and Territories in the drop-down list for the legend of the last filtered layer.

We can easily see that 12 records do not occur in any State or Territory, and those points have been highlighted on the map. You can zoom and pan the map to see the issues if desired. In many cases, the accuracy or precision of the locations are likely problems. In the former for example, the coordinates may have been wrongly read from a map, while the latter can be caused by not having sufficient number of decimal places to place the observation on land. When ready, click on ‘Create layer without selection’ to create a new point layer of Vulpes vulpes without ‘swimmers’! Filtered records in the biocache

and this is what we will see

Filtering records by assigning them to an ad hoc group Legends in the Spatial Portal allow the user to modify the display of the mapped layer. For more information on Legends »

To activate the legend in the Scatterplot, click on the ‘Species display setting’ button. This creates a floating window that renders changes to the points in both spaces on the basis of selected legend properties. The user has to press the ‘Apply’ button to activate the changes. Again, faceting is one of the options.

Note: Filtering by facet classes is not available. Scatterplots have the ability to create new layers based on records within or without defined environmental boundaries, but not based on contextual attribute values of the records themselves. For more information on Scatterplots »

In the image below the Scatterplot is faceted on ‘Basis of Record’. 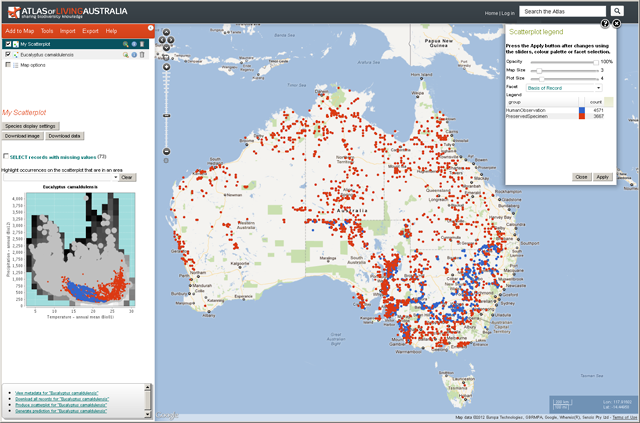 Scatterplot faceted on Basis of Record

In the image below the Scatterplot is faceted on ‘Institution’. 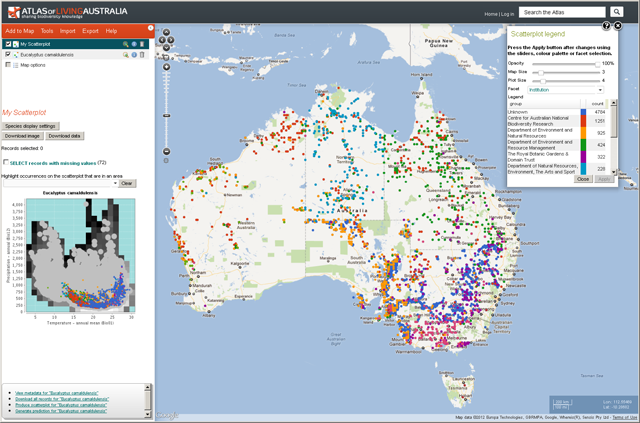