There are three special forms of location information that are additional to the Darwin Core terms on occurrence records:

Species checklists are a lists of taxa that occur within a defined area. Such checklists are often associated with islands and reserves. The spatial resolution of all the species in a checklist is effectively “the species occurs somewhere within the area (but we don’t know exactly where)”. We will be supporting the listing checklist when you do an Add to Map | Species. Checklists will also arise in area reports if those areas spatially intersect the area of interest. Area reports can be accessed by selecting Tools | Area report – interactive or PDF.

Such species checklists are supported by the ALA’s List tool: http://lists.ala.org.au (Figure 1). Anyone can create a species checklist in this tool by having a list of species names (dwc:scientificName) and linking that list to an area defined using the Well Known Text standard (see https://docs.microsoft.com/en-us/bingmaps/v8-web-control/modules/well-known-text-module for a simple introduction to the WKT format). The ALA calls this a “Region”. The Region corresponds to the Darwin Core term “footprintWKT”.

Sadly, the ALA has not as yet run a campaign to locate and add the many public checklists that are out there, so if you are aware of any, please enter them using http://lists.ala.org.au. 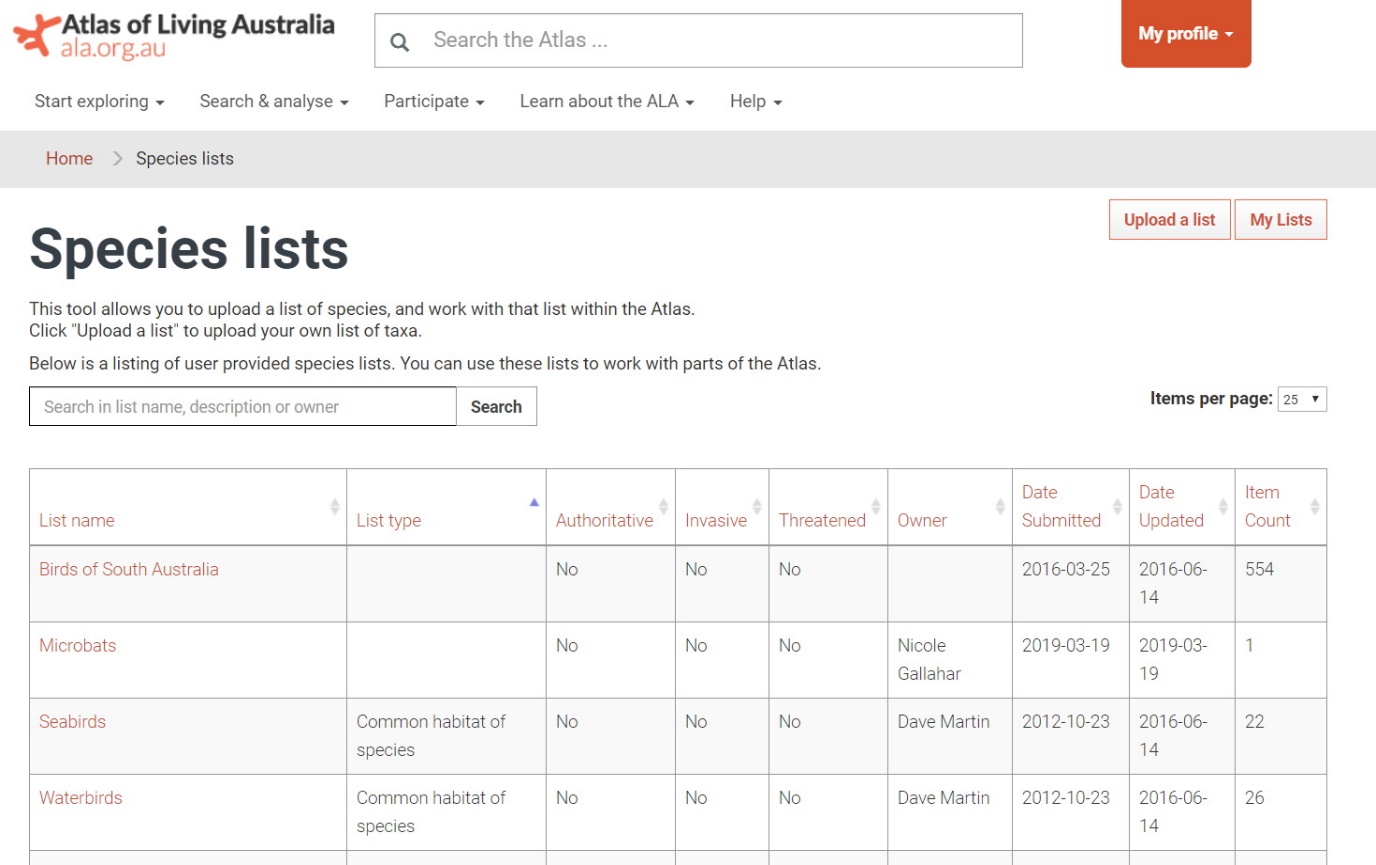 Figure 1. Some of the lists in the ALA's List tool

The expert distribution areas defined are what I call multiple polygons as they don’t have to be restricted to a single area. For example, a species may occur in southeastern Australia and south western Australia but not in between. A species may also have more than one expert distribution, for example, the New Holland Mouse (Pseudomys novaehollandiae) has a ‘Likely’ and a ‘Maybe’ expert distribution generated by staff at the Department of the Environment and Energy, as this is an EPBC designated species (see https://www.environment.gov.au/biodiversity/threatened/species).

The only current way to find expert distributions is to use the Spatial Portal’s Add to Map | Species and if the species has one or more distribution(s), they will be listed. An example map of the distribution of the Satin Bowerbird (Ptilonorhynchus violaceus) and the associated Expert Distribution can be seen in Figure 2. Note that there are quite a few points outside the expert distribution. There can be multiple reasons for this including: changes in range over time; or, species identification errors and location recording errors. Only closer analysis of each occurrence record will determine the validity of that record. 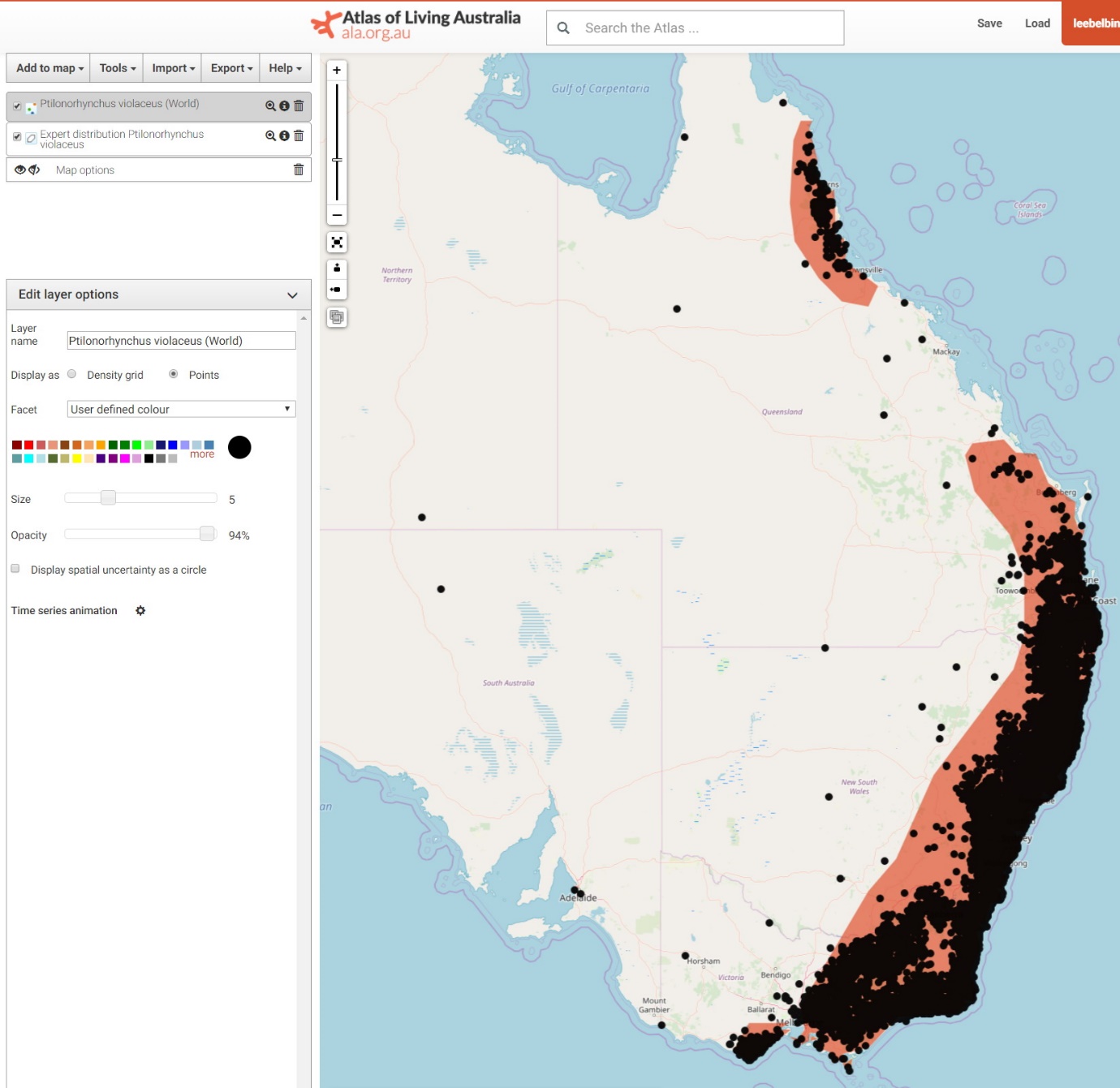 Figure 2. Distribution of Ptilonorhynchus violaceus and its 'Expert distribution'.

We would anticipate that the ALA will encourage ‘Expert distributions’ for an increasing number of species.

There are alternative ways to come up with some form of ‘expected distribution’ for a species or even higher taxonomic groups. One method uses what is generally referred to as Species Distribution Models (SDMs). The Spatial Portal has a robust version of SDM in Tools | Prediction that uses the MaxEnt software (see https://onlinelibrary.wiley.com/doi/pdf/10.1111/j.1600-0587.2013.07872.x).

This method takes a set of occurrence records and an associated set of environmental values at those points and elsewhere (see 3 below about spatial ‘intersections’) and creates a spatial surface of pseudo-probabilities of the species occurring. It is not the purpose of this article to go inter details about SDMs, suffice to say that MaxEnt uses a strategy that basically says, “If these are the environmental conditions where most of the observations are found, we can find other areas where similar  environmental conditions occur and therefore the species is likely to also occur”?

If you made a rule that you would ignore areas that had a probability below a probability threshold (say 0.7), then what remains is another form of ‘Expert distribution’. The ALA aims to build up a database of such probability maps from expert modellers.  A collaborative project is currently underway between some of the Australian States, the Federal Government, the ALA and BCCVL to standardize the generation of models for endangered species.

There are two tools in the Spatial Portal which will convert points to areas and are related to ‘Expert distributions’ without the need for an ‘expert’.

Possibly the first question you may ask is, why would you want to do this? The answers are largely based on the need to smooth out, summarise the point data, or provide spatial continuity. The occurrence records in the ALA come from a multitude of sources and have a multitude of potential and actual issues. By converting points to some form of area, we may expose ecological characteristics that may not be as obvious through examination of the points. See what you think.

Points to grid, as its name suggests takes a set of points and transforms them into gridded values. The points could come from anywhere, e.g., importing a set of latitudes and longitudes using the Spatial Portal’s Import | Points. The tool can produce three types of outputs:

The parameters are the size of the grids (in decimal degrees) and the nature of the (spatial) moving average to be used. Figure 3 below used Eucalyptus gunnii (limited to Tasmania), with a 0.1 degree (~10km) grid and a 5x5 moving average. You can see that the density of points varies from near zero to near 30 records per 10km square. This gives you a good indication where the hotspots are, but not taking the time of observation into account. 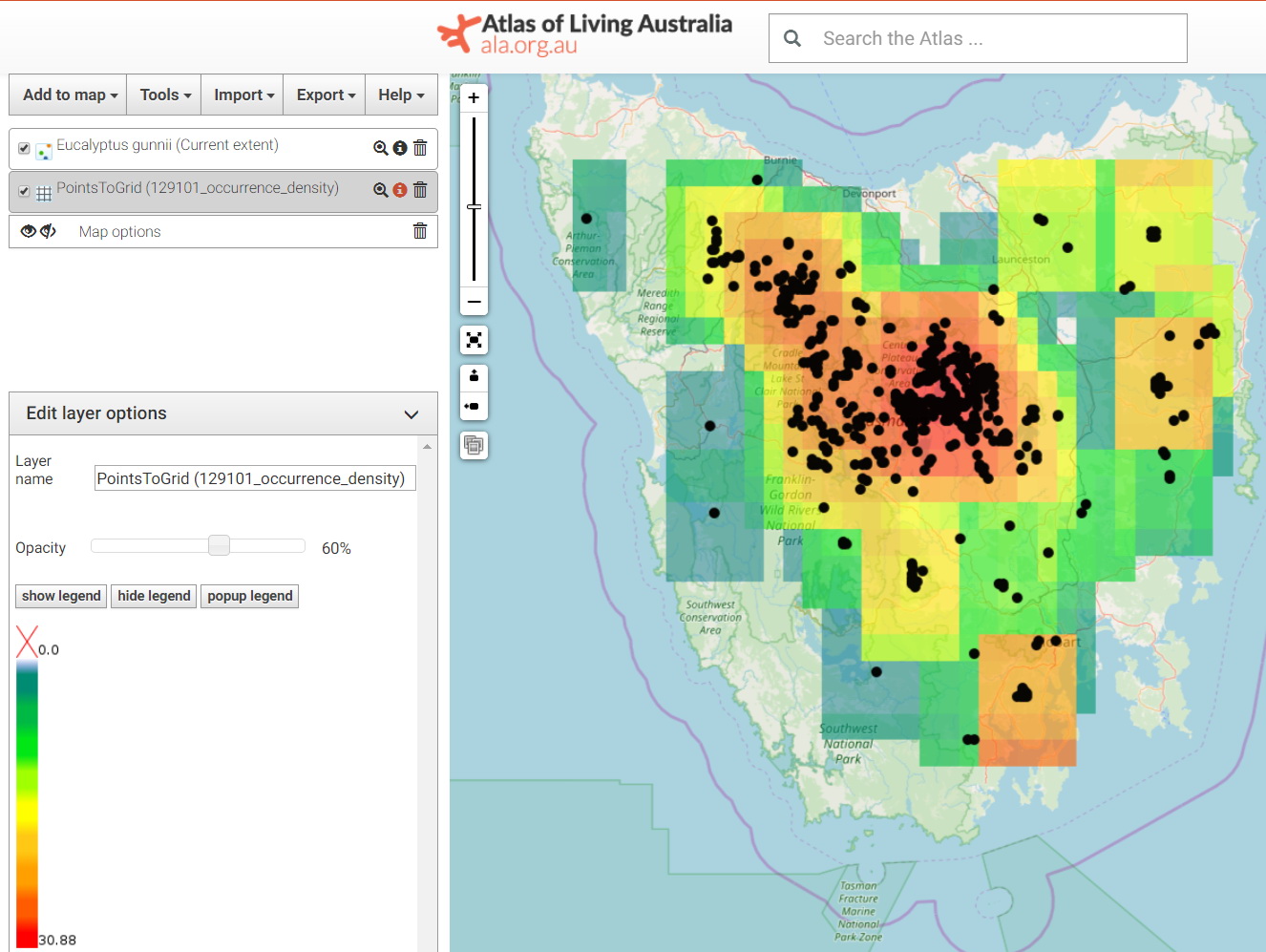 The species richness grid operates similarly, but applies when there are multiple species points as input. This option counts the number of different taxa within the nominated grid, plus or minus applying a moving average.

The sites by species matrix is outside the scope of this article.

Area of Occupancy (AOO), Extent of Occurrence (EOO) and Alpha Hulls are tools for summarising the spatial distributions of species occurrences. AOO and EOO are two key criteria for the IUCN Red List for classifying species at high risk of global extinction. AOO adds up the (by default 2x2km) grid cells that are occupied by a species. EOO is equivalent to what is normally terms the ‘minimal convex hull’ – the area defined by convex lines that fully enclose all the points. The difference between AOO and EOO provide an indication of how the species is distributed across its range.

Alpha hulls are a hybrid method of generating areas around points. The alpha parameter controls the ‘tension’ on the lines surrounding the points, so by varying alpha, you can move between AOO as a minimal area to EOO – a maximal area. See Figure 4. 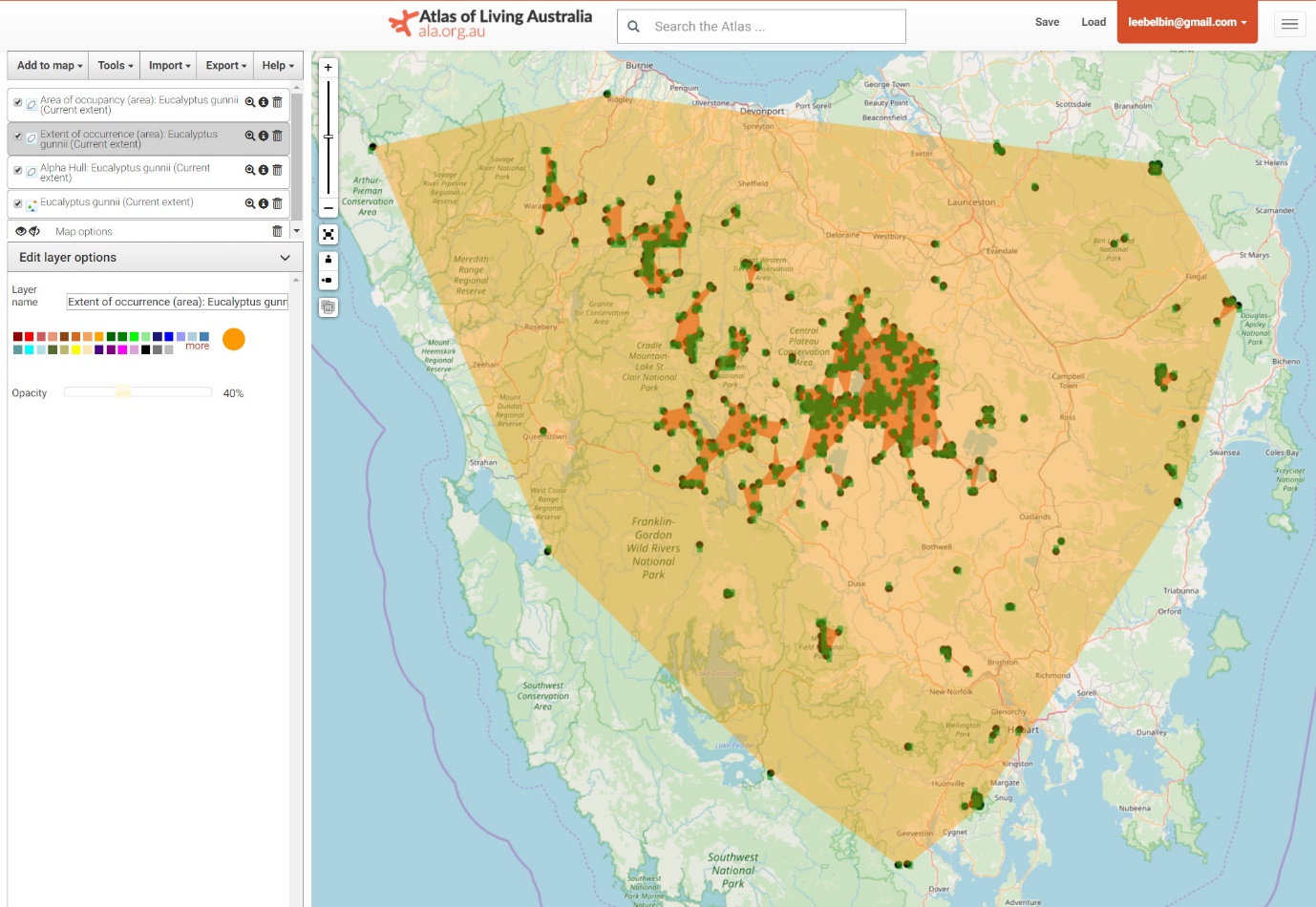