A new entry is added to the layer list for each layer added to the map; species, area or layer. All layers have a set of associated functions. The layer list panel reveals the features that are associated with each layer. 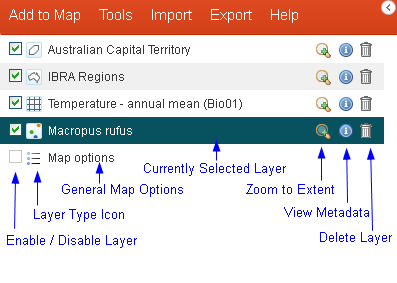 The five different types of layers can be identified by the icons to the left of the layer name. Species are usually (occurrence) points but can be polygons in the case of checklists (list of species within an area) or ‘expert distributions’. Areas are polygons. ‘Layers’ can either be contextual (polygonal) or environmental (gridded). Contextual layers contain polygons that are described by a class. For example the contextual layer called Land Use has a class called ‘Forestry’. Environmental layers have grid cells (square polygons:) that contain numeric values. For example, the layer called Mean Annual Temperatures has grid cells containing temperature values such as ‘18.8c’,

There are links between the data of type ‘Areas’ and the data type ‘Layers’ when the layer is a contextual layer. An example may help clarify this link. One of our (contextual/polygonal) layers is called ‘Australian States and Territories’ and one of the classes in this layer is called ‘Tasmania”. You can map the layer and see all of the States and Territories or you can add an area to the map called ‘Tasmania’ – one of the layer’s polygons (in this case, multiple polygons as the Tasmanian islands are included). Mind you, if you map ‘Tasmania’ from the Add to Map | Areas function, Tasmania becomes a layer. Confusing isn’t it?! 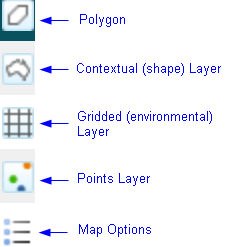 The contents of this panel is based on the type of layer that is selected in the Layers Panel or the result of analysis tool operation. These specific functions are discussed in their respective help sections.

As layers are added to the map, a list of potential actions will be listed in the Hints Panel. Selecting a ‘hint’ will initiate the action and take you to the appropriate step of the wizard to add in the extra information.

The hints operate on the highest layer of the particular type (species, area, environmental or contextual layer) shown in the list. So the topmost species, topmost area and topmost environmental or contextual layer of the layer list have hints applied to them. Layers can be reordered by clicking a layer to select it, then dragging it up or down thereby causing the hints to change.

The hints are indicative rather than all inclusive. The hints try to predict the likely actions the user will want to carry out, based on the layers added to the map.

Each of the layer types have their own set of actions added to the hints. However if both species and areas are added to the map, then their hints combine.

Summary of hints for layer type:

Area and Species and Layers

Note: the Area and Species hints that combine are shown in bold