We have replaced the concept of an assemblage with Lists. A list, like the assemblage, is any combination of species but we have now formalized the generation, management and use of these lists. They key difference between the assemblage and the lists is that Lists are retained by the system for future use.

To use the full functionality of Lists, you must register on the Atlas site as the List is stored against your name. Lists are by default public but as a List owner, they can be restricted or deleted after use.

A List can be created on the fly in the Spatial Portal or through the Lists page. You can share administrative functions with other registered ALA users: Lists can be edited by anyone given the authority. Taxa can be added, modified or deleted from the List and the List can be deleted if no longer required.

NOTE: Lists created via the Spatial Portal (on the fly) are by default created as PRIVATE lists. This means that they will not be exposed on http://lists.ala.org.au. These private lists can be edited and shared using the Lists functionality.  You can choose to make your list publicly accessible when creating it or later. If the list is temporary, please remove it once the project or exercise has been completed.

A List can be used anywhere the spatial portal asks for species (or other taxa) input. The options when inputting taxa are:

The following example shows adding a species layer to the map, with the option to create an on the fly list selected. 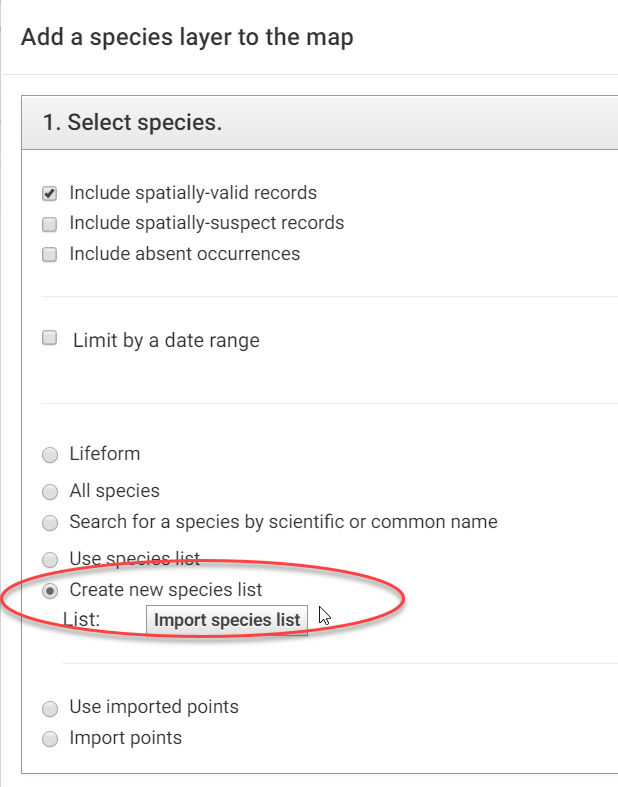 A species List is a group of taxa/species. The Spatial Portal can create this list and generate one mapped layer that can be be used in the same way as a single species layer. For example, faceting, filtering, scatterplots, prediction, points to grid, GDM and exports.

A species List can be created on the fly by typing or pasting in any combination of scientific or common names or LSIDs (Life Science Identifiers) into the species selection multi-line text box and clicking the Add button. 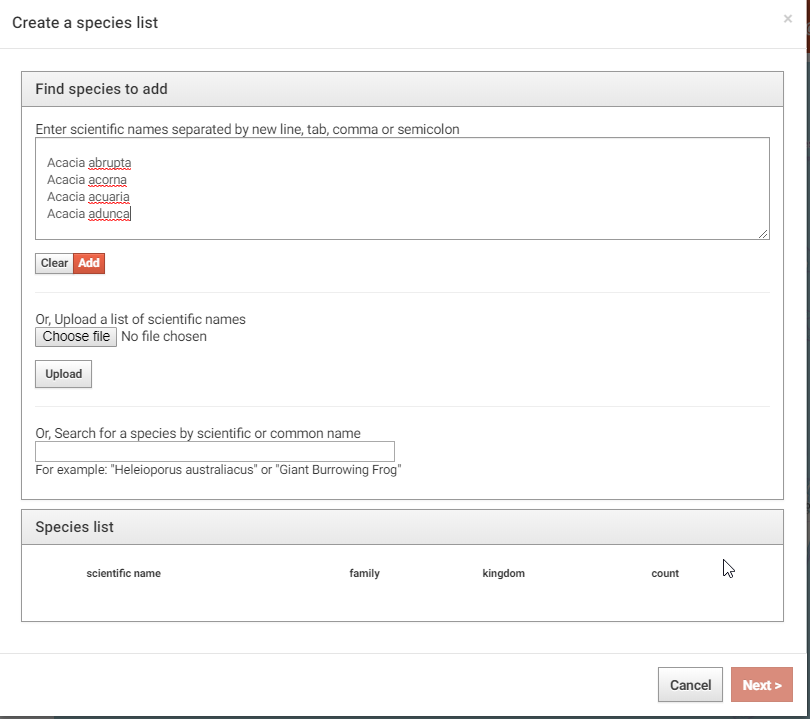 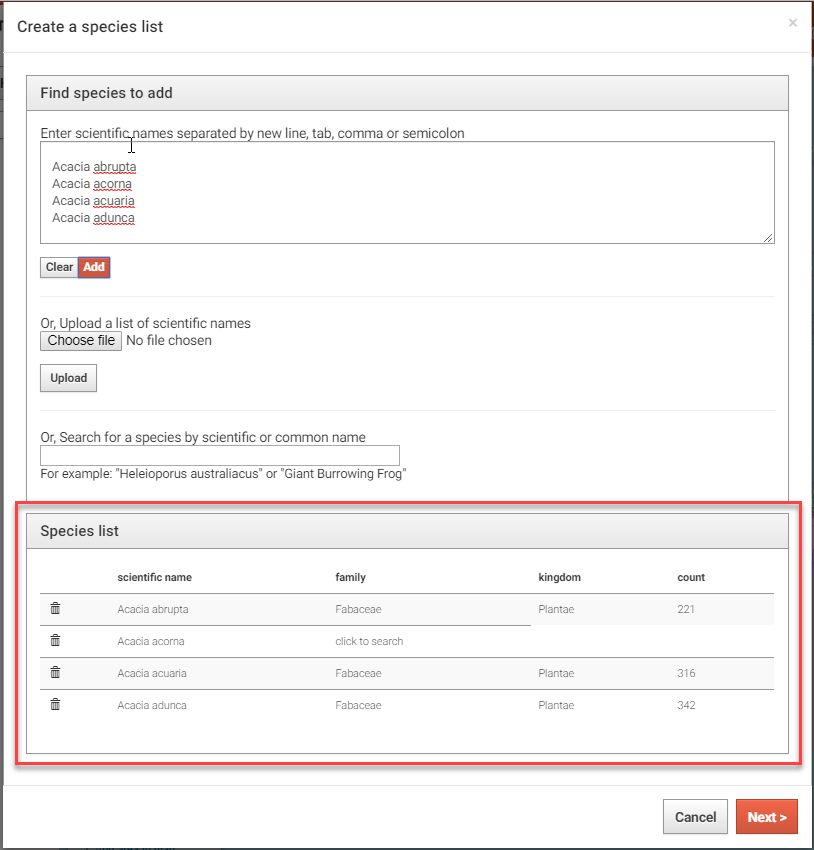 The names or IDs will be looked up in the National Species List and you can see in the list whether the names are found as the family, kingdom and count columns will be populated. The look up accepts synonyms and will match on currently accepted names. If a species name does not exist in the National Species List, but the genus does, then it will create a match against the whole genera. Unmatched names will also be listed.

The returned records list of scientific names, includes those that are found and not found. If a match can't be found, there is the option to search for a match.

Press the click to search in the family column for unmatched species. This will copy the species into the Add from search text field. This uses a different search system using auto-complete. It is usually effective to remove a few letters to search for close names. Hover over the taxon you require and click it once it highlights. It will be added to the species list below. 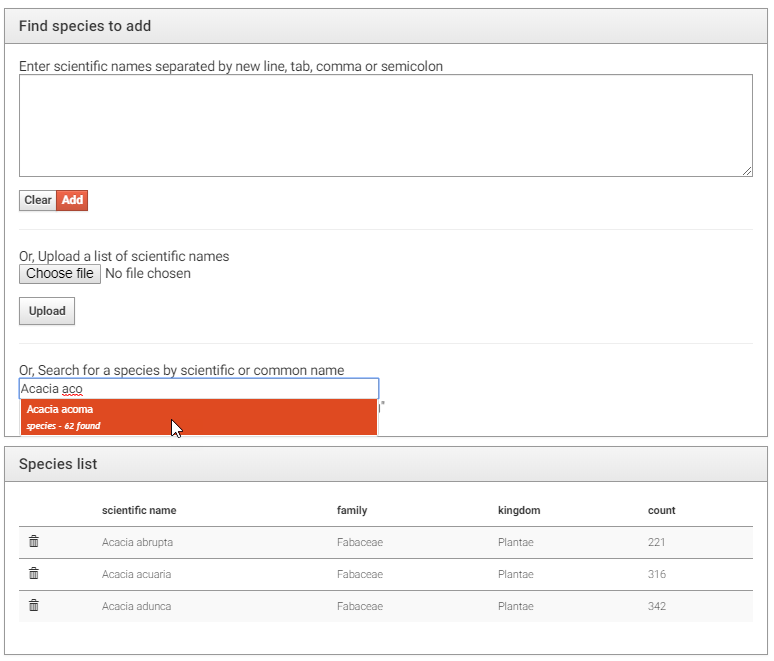 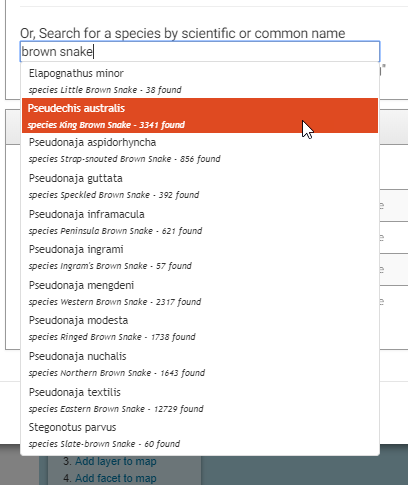 You will be asked to name your list and you have the option to give it a description. By default, the list will be Private, but can be made a public list by clicking the checkbox to remove the tick.

If a List has been previously created, it can be used wherever a single species/taxa can be used. The List may have been created by you or by another registered user. When you select Use existing species list, the list of Lists is displayed and one or more Lists can be selected for use.  You can use the filter option to help find a specific list. 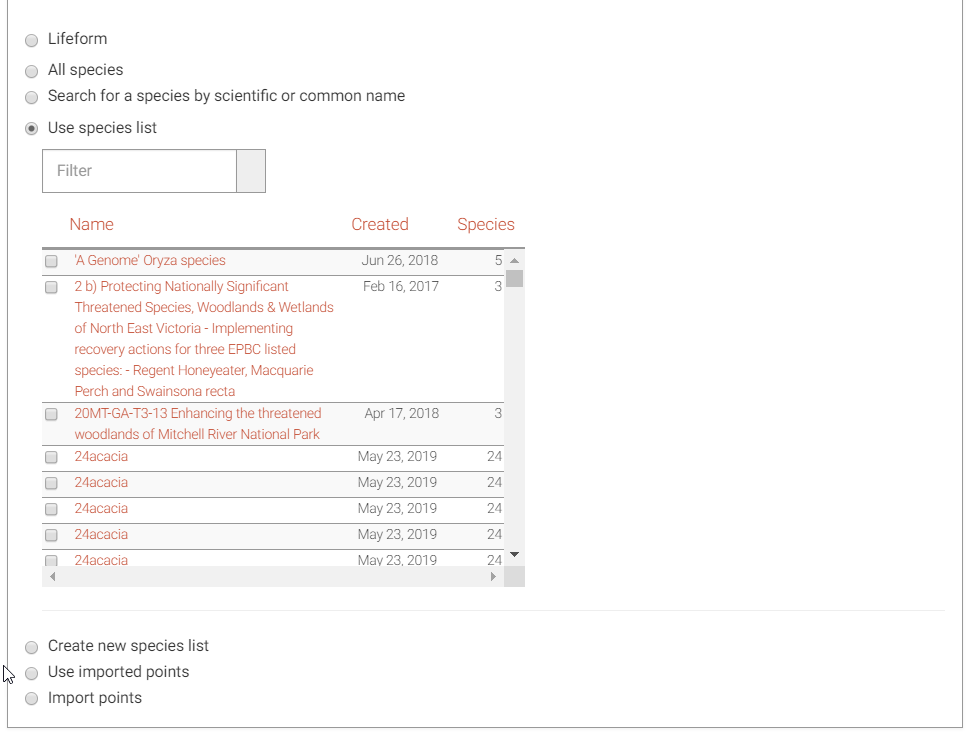 As noted above, regardless of the number of taxa, the List will be mapped as a single species layer with all associated occurrence records. You can subsequently facet the mapped layer on scientific name or a host of other features. This will display the classes of the facet as separate colour on the map. You can also create a new layer by filtering on a subset of classes of the facet.

Restrict to an Area

The options in the Restrict to an area section limits the mapping of occurrence records to an area. Areas may be:

Any areas already defined on the map will be available.

Defining a new area allows you to add an area layer using any one of 14 options.

The figures below are examples of mapping multiple species by the use of Lists. 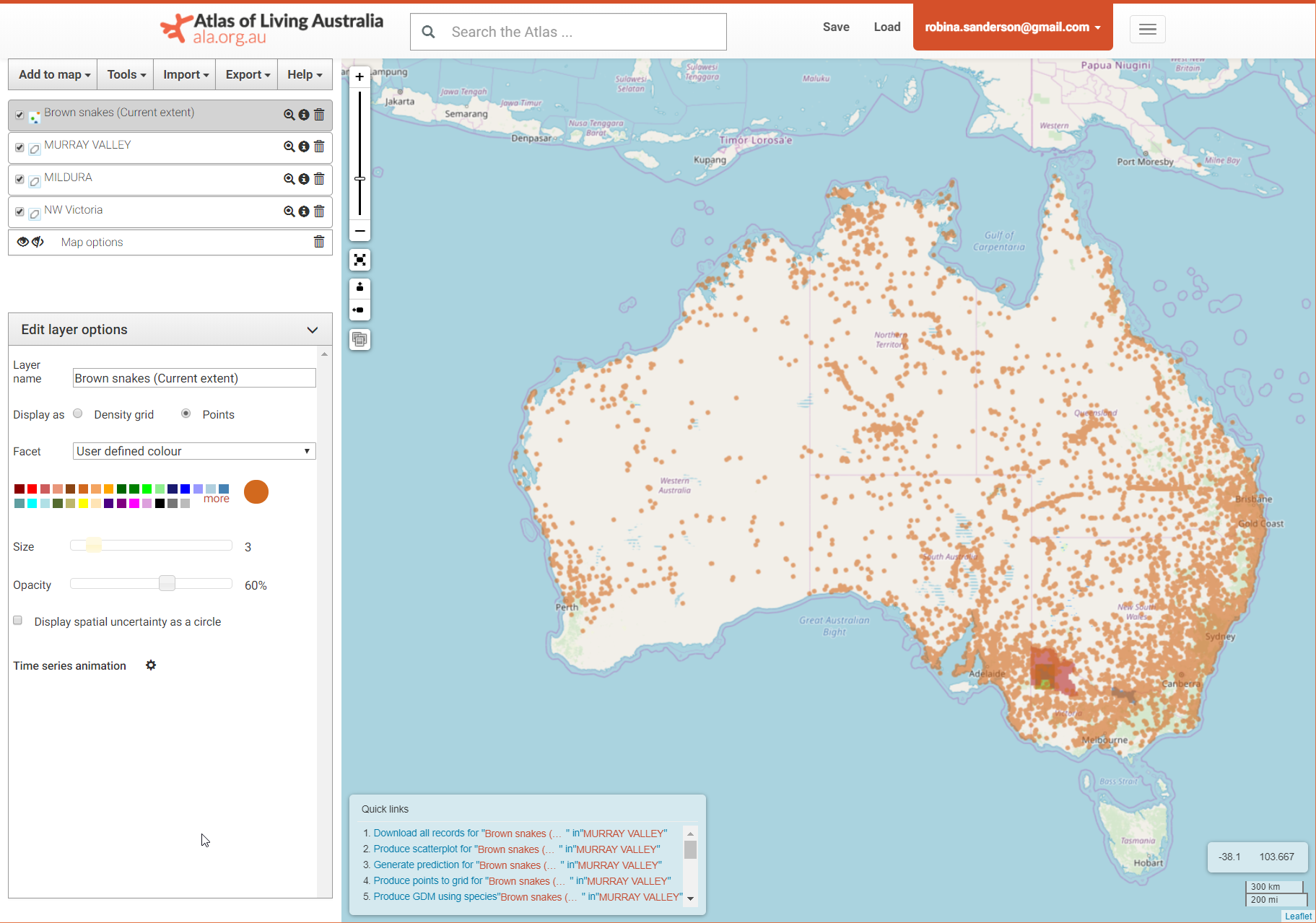 2. Occurrences added to a map via and list and faceted on scientific name. 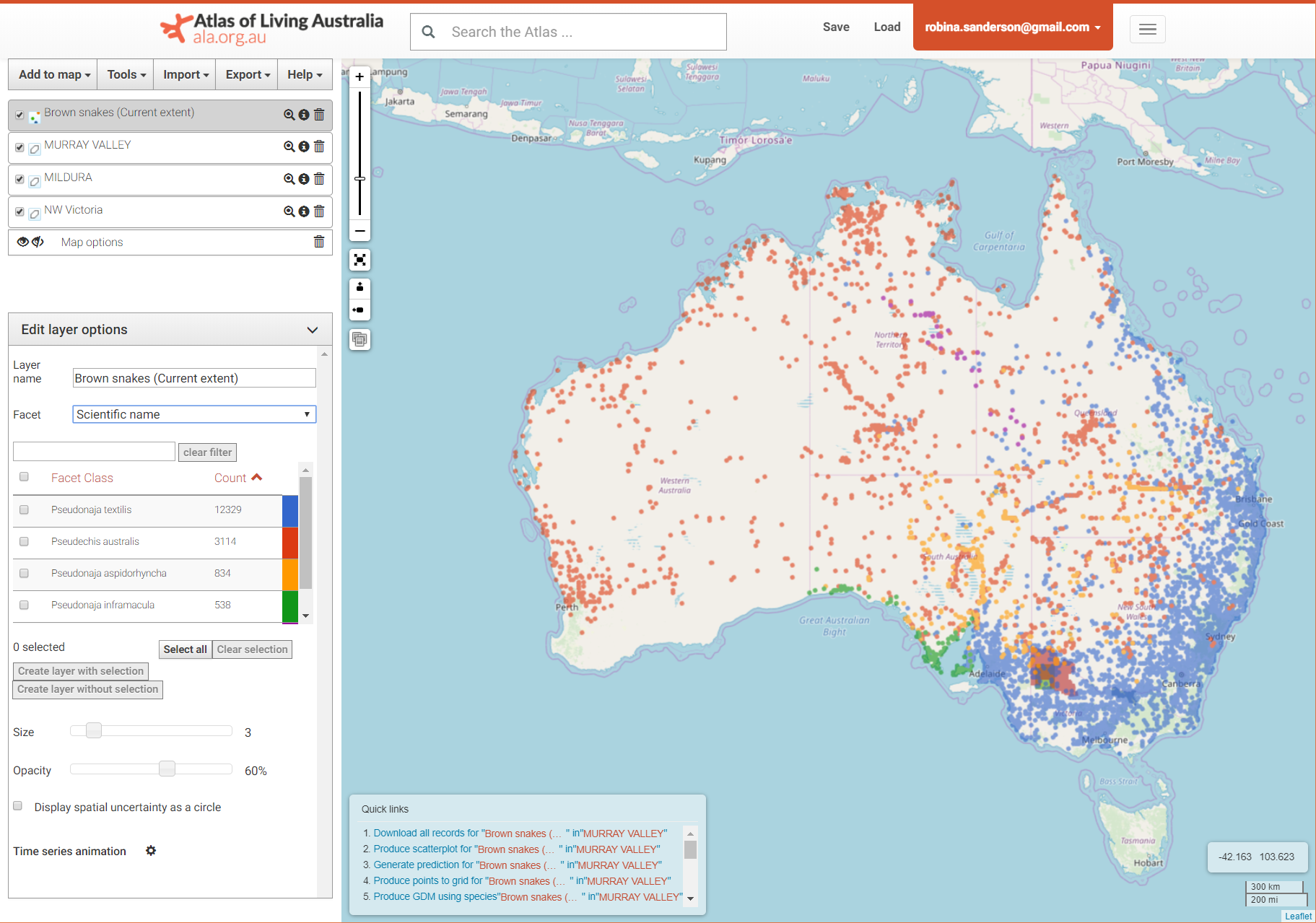 3. Occurrences added to a map via a list and displayed as a density grid 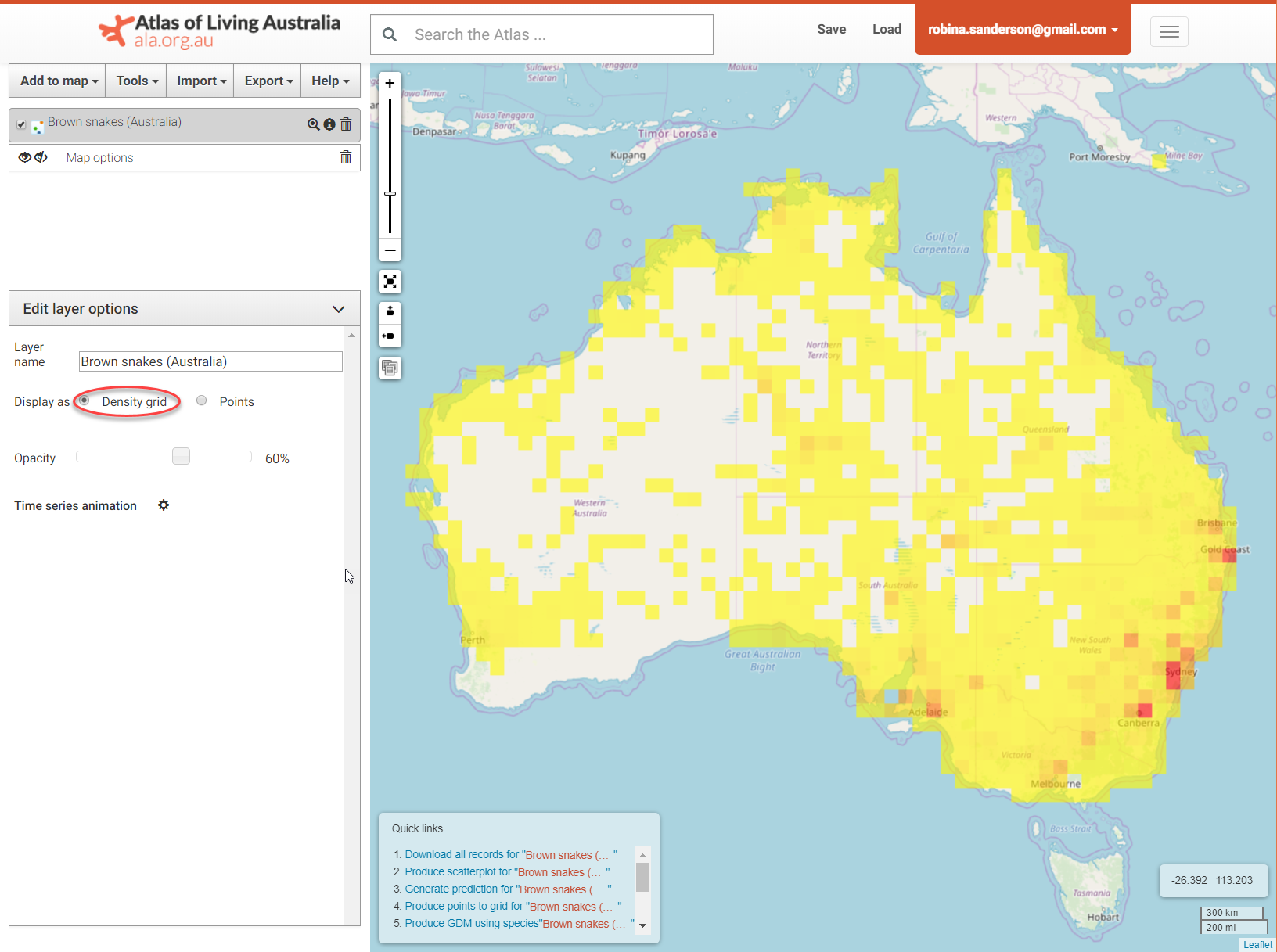 When the layer metadata icon

icon is selected in the layers list for the species assemblage the metadata is displayed. 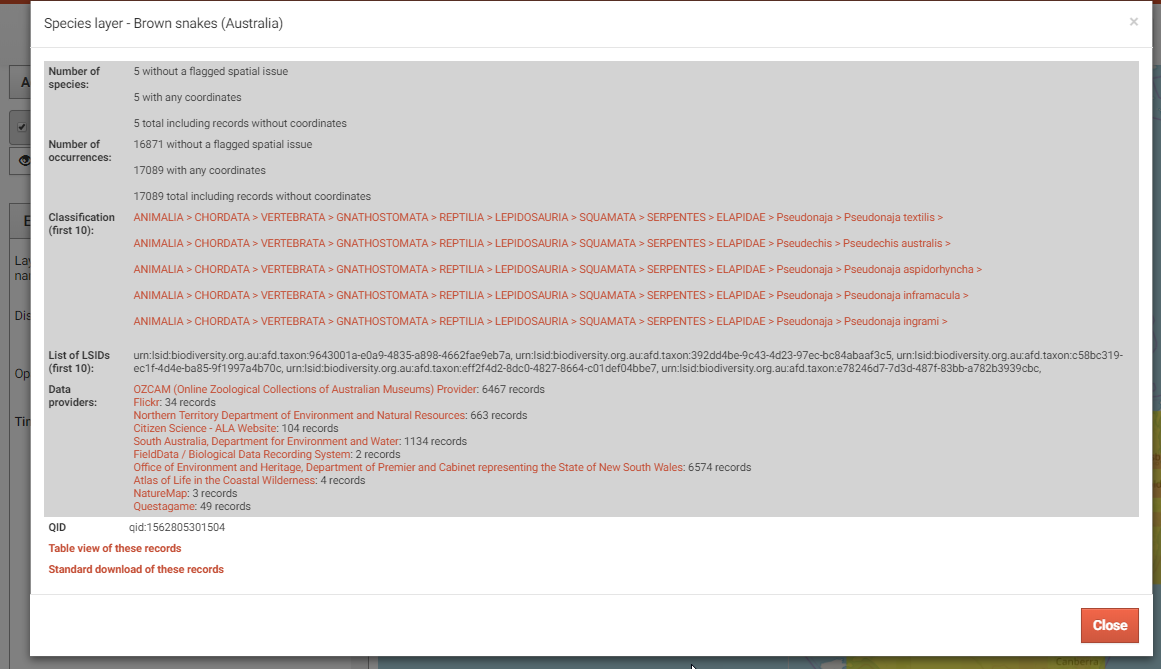 Note: this demo uses an older version of the spatial portal, however all functions for mapping multiple species are still available.