Area of Occupancy and Extent of Occurrence 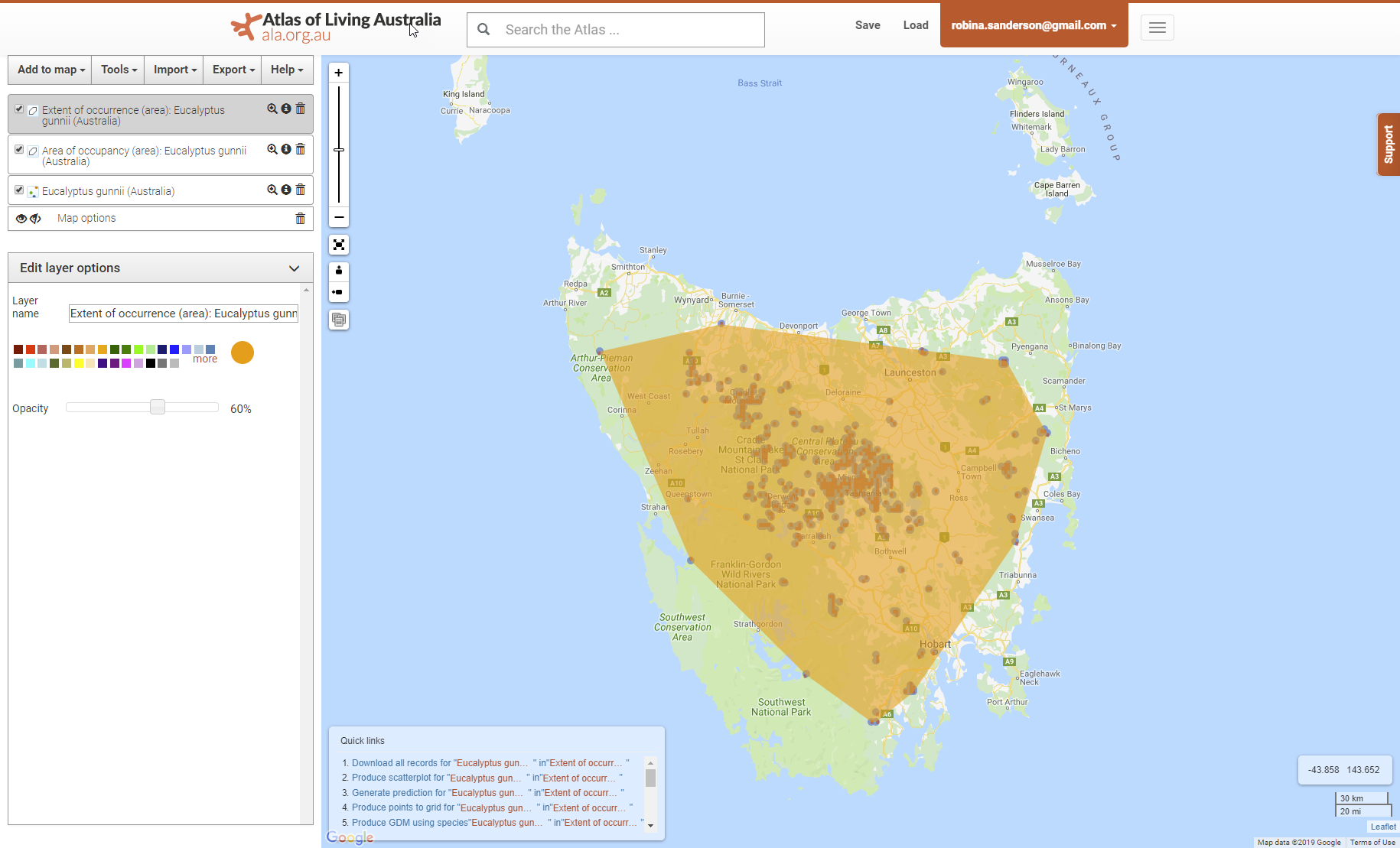 Area of Occupancy (AOO) and Extent of Occurrence (EOO) are two ‘statistics’ used by the IUCN for their Red List of Threatened Species (http://www.iucnredlist.org/). Their Red List of Categories and Criteria (IUCN 2012) defines these terms as follows-

“Area of occupancy [AOO] is defined as the area within its ‘extent of occurrence’ which is occupied by a taxon, excluding cases of vagrancy. The measure reflects the fact that a taxon will not usually occur throughout the area of its extent of occurrence, which may contain unsuitable or unoccupied habitats. In some cases (e.g. irreplaceable colonial nesting sites, crucial feeding sites for migratory taxa) the area of occupancy is the smallest area essential at any stage to the survival of existing populations of a taxon. The size of the area of occupancy will be a function of the scale at which it is measured…” See Figure 2 IUCN 2012 below. The IUCN recommendation for the grid size used to calculate AOO is 2km but is user-defineable  This grid is placed over all selected taxon records within the user-defined area.

Extent of occurrence [EOO] is defined as the area contained within the shortest continuous imaginary boundary which can be drawn to encompass all the known, inferred or projected sites of present occurrence of a taxon, excluding cases of vagrancy (see below Figure 2 IUCN 2012). This measure may exclude discontinuities or disjunctions within the overall distributions of taxa (e.g. large areas of obviously unsuitable habitat)… Extent of occurrence can often be measured by a minimum convex polygon (the smallest polygon in which no internal angle exceeds 180 degrees and which contains all the sites of occurrence).  In the Spatial Portal, EOO is calculated as the minimum convex hull based on the “presence” taxon occurrence records within the user-defined area. The alpha hull value is used when calculating the Extent of Occupancy (EOO) for assessing conservation risk. It examines the distance between occurrence points and modifies the area to be included in the EOO based on a multiple (alpha - selected by the user) of the average distance between points. The lower the alpha value, the tighter the EOO will be around the occurrence points. For further information on alpha hulls, see:

AOO and EOO would normally be calculated on taxa that have some ‘conservation sensitivity’. The ALA uses the term “Threatened” for any level or class of conservation status via the States, Territories, Federal Government or IUCN. Any species that is deemed ‘sensitive’ in having some State/Territory or Federal conservation status will be processed through the Sensitive Data Service (SDS: http://www.ala.org.au/faq/data-sensitivity/).  The Sensitive Data Service may have changed the location of taxa that have a sensitive status. It is therefore wise to

The statistics are downloaded automatically to your system in an .html file. Also contained in the zip file are shape files for the layers.

NOTE: We hope that ‘full spatial resolution’ records will be able to be made available for this analysis in the near future, but mapping high-resolution data would be disabled, except for authorised users.

Tools | Calculate AOO and EOO and Export | Species list can be used as an efficient way of generating lists of species are co-located (co-occur) with a target species or species list. For example, to identify which species co-occur with say within 1km of occurrences of Casuarina obesa in Western Australia, go through the following steps. Note: if more detailed information is required rather than just a list, combine area of occupancy with Tools | Area report.